In my previous post I explored the United Nations’ brief post-war flirtation with a Fiscal Commission, which came stuttering to a halt in 1951 due, it seemed, to the lack of a compelling purpose that might have motivated states to fight to retain it. The United Kingdom had supported a Russian proposal to wind up the UN’s tax work, a position that seems consistent with its subsequent opposition to the creation of what is now the UN Committee of Experts on International Cooperation in Tax Matters two decades later. It’s perhaps more surprising that, as we will see, the British were initially opposed to the creation of a Fiscal Committee at the Organisation for European Economic Cooperation (OEEC), the predecessor of the OECD, as well. Today the UK is a strong supporter of the OECD’s position as the dominant site of international tax cooperation, but it did not start out that way.

We begin, as the League of Nations’ tax work did, with a resolution of the Executive Committee of the International Chambers of Commerce resolution, in 1954. The resolution identified double taxation as a “serious obstacle” to trade and investment in Europe, and for OEEC members to take steps to relieve it. It asked for unilateral measures, bilateral treaties and, ideally, a multilateral convention. The OEEC’s secretary general was sceptical that the organisation could add any value here, especially given that the UN had not at this point formally dissolved its Fiscal Commission.

He also set out another surprising objection to the ICC’s proposal. It is often asserted that the OEEC picked up the League of Nations’ London draft model bilateral tax treaty, which favoured the interests of capital exporters, rather than the capital importer-favouring Mexico draft. While it is probably true that the eventual OECD model is closer to the London than the Mexico draft, the ICC’s proposal that the OEEC use the London draft was actually a problem for the OEEC, because not all of its member and associate countries had endorsed it. “If an approach of this kind were to be adopted by the OEEC, therefore,” concluded the Secretary General, “it would be necessary for the Organisation to set up an expert body charged with the duty of attempting to produce a more acceptable draft.” 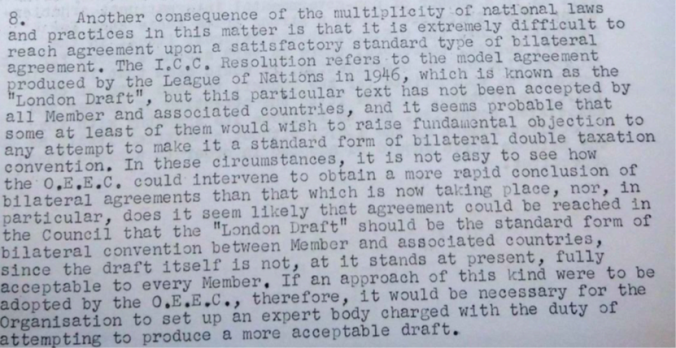 Soon after this, Switzerland and the Netherlands began to circulate proposals for a fiscal commission. In a curious echo of the current debate around digital taxation, these proposals all expressly mentioned turnover taxes, increasingly imposed by states on the rendering of services, as the main new problem motivating their concerns.

The Dutch note circulated in 1955 noted that “the number and extent of problems relating to taxation has been steadily increasing, not only in the national field but also and especially, in connection with the gradual intensification of international economic relations, in the international sphere.” It advocated work under the umbrella of the OEEC because it was consistent with the organisation’s mandate, and because of the need to discuss in “a smaller circle than the United Nations.” In December 1955 the Netherlands and Switzerland were joined by Germany, publishing a joint memorandum proposing the creation of a expert committee of “specially qualified high-ranking Government representatives,” and in January 1956 an ad hoc committee was created to conduct a study into the matter. The ad hoc committee immediately recommended the creation of a full committee, citing “ample evidence that there are cases of double taxation which constitute obstacles to international trade and investment, and that action to remove these obstacles should be possible within a group of like-minded nations such as the members and associated countries of the OEEC.”

In March 1956, the Fiscal Committee was created, against the judgement of the British and Scandinavians. Britain’s attitude throughout had been sceptical, but acquiescent. The British representative, Sir Hugh Ellis-Rees, “criticised the memorandum for being vague and for not revealing what the usefulness of the study would be, nor what were its precise objectives.” On the other hand, he told the Inland Revenue, “I think that in our position in the organisation it would be tactically unwise to try to suppress at this stage a movement which has some support however ill-founded it may turn out to be.” Two handwritten notes in the Inland Revenue files are worth quoting at length here. One is from Alan Lord, who eventually sat on the Committee for the UK.

We regard the whole idea as, if I may borrow the FO [Foreign Office] words, “futile and unrewarding” or, in cruder terms, as a gathering of international chatterers for the purpose of chattering.

We must, in the interests of international unity, agree to attend a meeting, which is [illegible] but if anything on this should turn up with Mr Daymond and [illegible] you will no doubt determine your answer by reference to our Policy of being Against It.

The author of the second note is unidentified, but it shows how the UK viewed the Swiss and Dutch proposals, as well as – in the third paragraph – a pessimism that seems rather anachronistic when compared to the kind of work conducted by the OECD today.

1. Insofar as I can discover from this rather Crazy Going file, the pace is being made by: (i) the Dutch, who seem to be resentful about the liquidation of the Fiscal Commission of UN (which we ourselves regard as a Good Thing) and so want to set up a new Committee or Commission to discuss, inter alia, fields, spheres and bases, & (ii) the Swiss, who seem to be engaged in a private brawl with the French.[…]

2. If this be so, the answer to (i) is that we regard this exercise, to use the FO phrase, as “futile and unrewarding” and (ii) that this is a private fight in which we do not wish to join.

3. There seems to have been later on a ganging up of Germans, Swiss and Dutch to give a regrettable academic flavour to the whole thing and to discuss domicile, “classification of income” and “localisation of income”, whatever these terms may mean. Presumably some attempt to reach, for example, agreement on whether interest should be charged by reference to origin or residence, an exercise which long experience has shown to be pointless.

The British concerns were, I think, unfounded, as the new committee raced through a list of five thorny areas within a year, finding consensus on topics such as permanent establishment and the taxation of shipping and airlines, which are recognisable today as core components of the OECD model convention.

The most recent document in this particular file is an interim report from the Fiscal Committee in 1957. It shows how within 18 months the committee was already consolidating its ways of working (Working Parties on each specific issue, just as the OECD has today) and forming a clear raison d’être. In the excerpts below, I’ve picked out three things that struck me from the committee’s interim report. First, how forcefully it began to make the case for tax cooperation, as European economies became more integrated. Second, the recognition that other countries might be incentivised to follow Europe’s lead, because of its “placement in the world economy.” It is interesting to reflect on how much this echoes the EU’s tax cooperation efforts today, perhaps more so than the OECD, for which the economic power of its members complicates its authority.

Finally, the committee members had already begun to “harmonise their views”, perhaps the first conscious expression of what would become a powerful driver of successful tax cooperation: the formation of a consensus about how to do tax among an international community of practitioners.