The report I authored for Tax Justice Network-Africa is now available. It’s based on field research done a year ago and has been a little while getting into print.

Here’s a link to read it online at academia.edu 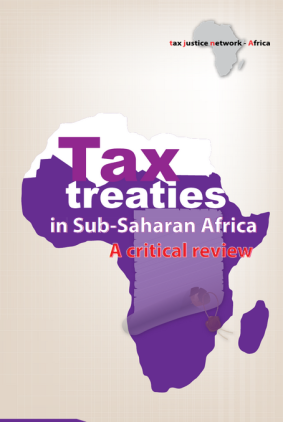 And here’s the introduction:

There is growing attention on the question of tax treaties signed by developing countries. The costs of tax treaties to developing countries have been highlighted in recent years by NGOs such as ActionAid and SOMO. During 2014, an influential IMF paper warned that developing countries “would be well-advised to sign treaties only with considerable caution,” and the OECD, as part of its Base Erosion and Profit Shifting (BEPS) project, proposes to add text to the commentary of its model treaty to help countries decide “whether a treaty should be concluded with a State but also…whether a State should seek to modify or replace an existing treaty or even, as a last resort, terminate a treaty.”

Meanwhile, some developing countries seem recently to have become concerned by the negative impacts of some of their treaties. Rwanda and South Africa have successfully renegotiated their agreements with Mauritius. Argentina and Mongolia have cancelled or renegotiated several agreements. Responding to this pressure, two of the developed countries whose treaty networks have raised concerns, the Netherlands and Ireland, have begun a process of review.

To investigate this apparent shift in opinion among policymakers, and to see what lessons can be drawn by other developing countries, Tax Justice Network Africa commissioned this study of current policy towards tax treaties in Uganda and Zambia, two countries that appear to be questioning past decisions. Fieldwork, which consisted of interviews with government officials and private sector tax advisers, took place in Kampala and Lusaka in September 2014.

Uganda has announced a review of its policy towards tax treaties, while Zambia is renegotiating several of its treaties. The Ugandan review has several motivations, according to finance ministry officials. The lack of a politically enforced policy to underpin negotiations is one concern. “When I go to negotiate, all I have is my own judgement,” according to a negotiator. “We thought that cabinet should express itself.” Officials are also concerned about the taxation of technical services provided by professionals in the oil industry, and are asking questions about the relatively poor deal Uganda got in its as yet unratified agreement with China.

Zambia, it seems, is keen to update very old treaties that were negotiated on poor terms by over-zealous officials in the 1970s. But a recent treaty signed with China on poor terms has created a difficult precedent, dragging down the terms of its recent negotiation with the UK. Zambia is also encumbered with several colonial-era treaties that need urgent attention.

This report is divided into four following sections. Section 2 describes the historical development of sub-Saharan Africa’s tax treaty network, including some of the reasons given for its development. Uganda and Zambia are used as examples. Section 3 looks at some of the core vulnerabilities in the content of tax treaties signed by African countries, set in the context of weaknesses in their domestic laws. Section 4 provides a critical perspective on recent initiatives taken by individual countries, regional organisations and other international organisations.

Section 5 provides recommendations for African countries. In summary, they should: