Today the International Centre for Tax and Development (ICTD) and ActionAid are launching a new dataset that I’ve developed over the last year. It’s the product of over a year’s work, mostly by an intrepid team of research assistants in the LSE law department, to code the content of over 500 tax treaties signed by developing countries. ActionAid, who funded the research assistants’ time, have also used the dataset to construct a league table for their campaigning work, and there’s a piece in the Guardian based on that. (I’m sure the headline, which criticises the UK, will provoke some debate.)

The aim of the dataset project is to make possible a whole lot of new research to get to the bottom of questions that have not been satisfactorily addressed in the literature to date. The jury is still out on whether tax treaties affect investment flows into developing countries, but do certain clauses matter more than others to investors? What determines the outcome of tax treaty negotiations: is it cooperation, power, or competence? What is a good outcome for a developing country from a tax treaty negotiation? Work on trade and investment agreements has already moved from a simple ‘is there a treaty?’ binary to studies based on the content of those agreements. With this dataset, we can do the same for tax treaties.

There’s also a working paper that I’ve written for ICTD, which sets out some of the initial conclusions I drew from simple descriptive work using the dataset. For example, here’s the chart showing how common treaty provisions that allow developing countries to tax foreign service providers have been over time. The difference between the two is that with a ‘service PE’, developing countries can only tax the company’s net profits, and only if it is physically present for a certain length of time; with a WHT clause, they can tax gross payments to foreign service providers, as most do in their domestic law, regardless of whether there is a physical presence.  The growth in both the provisions highlighted is quite notable. 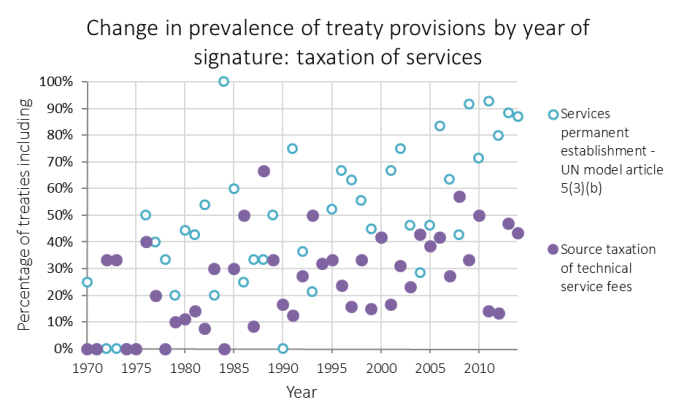 The story for capital gains is more mixed. Article 13(4) is an anti-avoidance tool that allows a developing country to tax capital gains from the sale of a company whose value is mainly physical assets in the developing country, even if the company is located abroad. It’s becoming more common, which is not surprising since variations on it are included in both the OECD and UN model tax treaties. Article 13(5) gives a developing country the right to tax gains from the sale of any company resident in that country, even if the sale takes place abroad. Interestingly, this provision is becoming more scarce, though countries such as Vietnam have only recently begun to tax in this way in their domestic law.

The downward trend is driven by falling withholding tax (WHT) rates, while the upward trend is primarily in permanent establishment (PE) provisions, as we can see by disaggregating the index into these different components.

This is new information that I don’t think people have been aware of before, so I’m quite excited about it. Here’s the summary of the working paper:

This paper introduces a new dataset that codes the content of 519 tax treaties signed by low- and lower-middle- income countries in Africa and Asia. Often called Double Taxation Agreements, bilateral tax treaties divide up the right to tax cross-border economic activity between their two signatories. When one of the signatories is a developing country that is predominantly a recipient of foreign investment, the effect of the tax treaty is to impose constraints on its ability to tax inward investors, ostensibly to encourage more investment.

The new dataset fills both these gaps. Using it, this paper demonstrates how tax treaties are changing over time. The restrictions they impose on the rate of withholding tax developing countries can levy on cross-border payments have intensified since 1970. In contrast, the permanent establishment threshold, which specifies when a foreign company’s profits become taxable in a developing country, has been falling, giving developing countries more opportunity to tax foreign investors. The picture with respect to capital gains tax and other provisions is mixed. As a group, OECD countries appear to be moving towards treaties with developing countries that impose more restrictions on the latter’s taxing rights, while non-OECD countries appear to be allowing developing countries to retain more taxing rights than in the past. These overall trends, however, mask some surprising differences between the positions of individual industrialised and emerging economies. These findings pose more questions than they answer, and it is hoped that this paper and the dataset it accompanies will stimulate new research on tax treaties.